One part of the radio hobby i enjoy is conversion of EXPMR radio's.

This all started many years ago when i first got licenced.

I do not do PMR Radio as a job only what i have read or info cleamed from PMR Engineers friends.

Radio transceivers  back in the 1980's were expensive to buy.

Back then there was a magazine available called Ham Radio Today or HRT.

Chris G4HCL   Lorek was the editor. Luckly for me Chris lived in the next village to me so i regulary chatted to him. 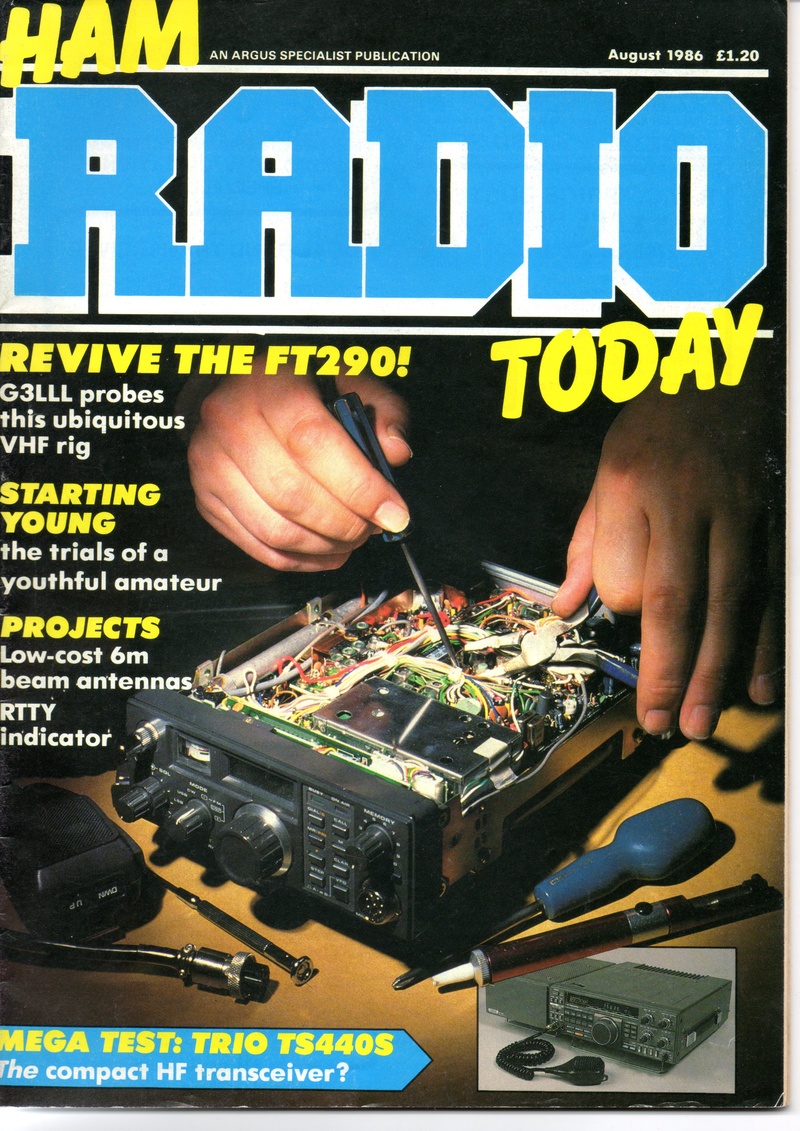 Chris at that time worked for Pye of Cambridge.He started doing conversion details in HRT.

This inspired me to have a go at EXPMR conversion.

Chris Lorek, G4HCL, from Whitby, Enlgand, died suddenly on 28 April 2018 after being taken ill in Goa, India.
He was 61 years old.
He worked as Chief Engineer on radio communications systems and equipment, but will be known mostly to RSGB Members as a prolific author.
He wrote many equipment reviews in RadCom and Ham Radio Today magazine, for which he was Technical Editor for seven years. In addition to having hundreds of articles published, he wrote several books, including the PMR Conversion Handbook for the RSGB.
He also co-edited the 7th and 8th editions of the Radio Communication Handbook.

And i am still learning !

Rigs converted over the years were . 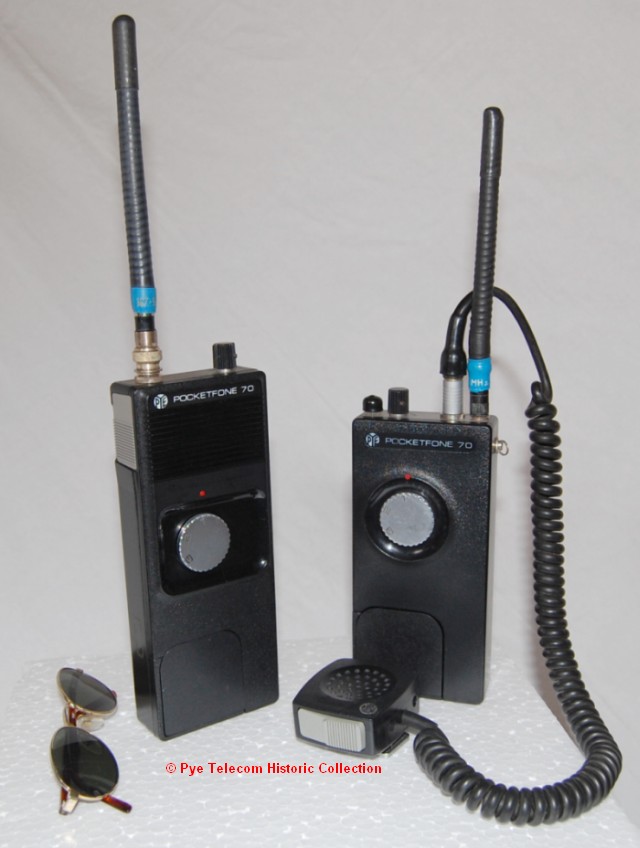 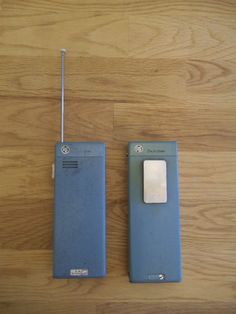 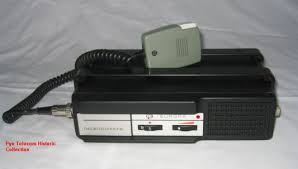 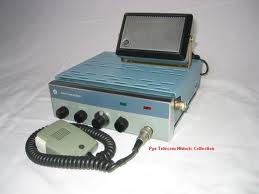 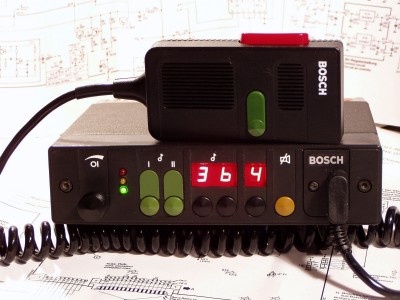 There were a few others !

Gear i am playing with now : 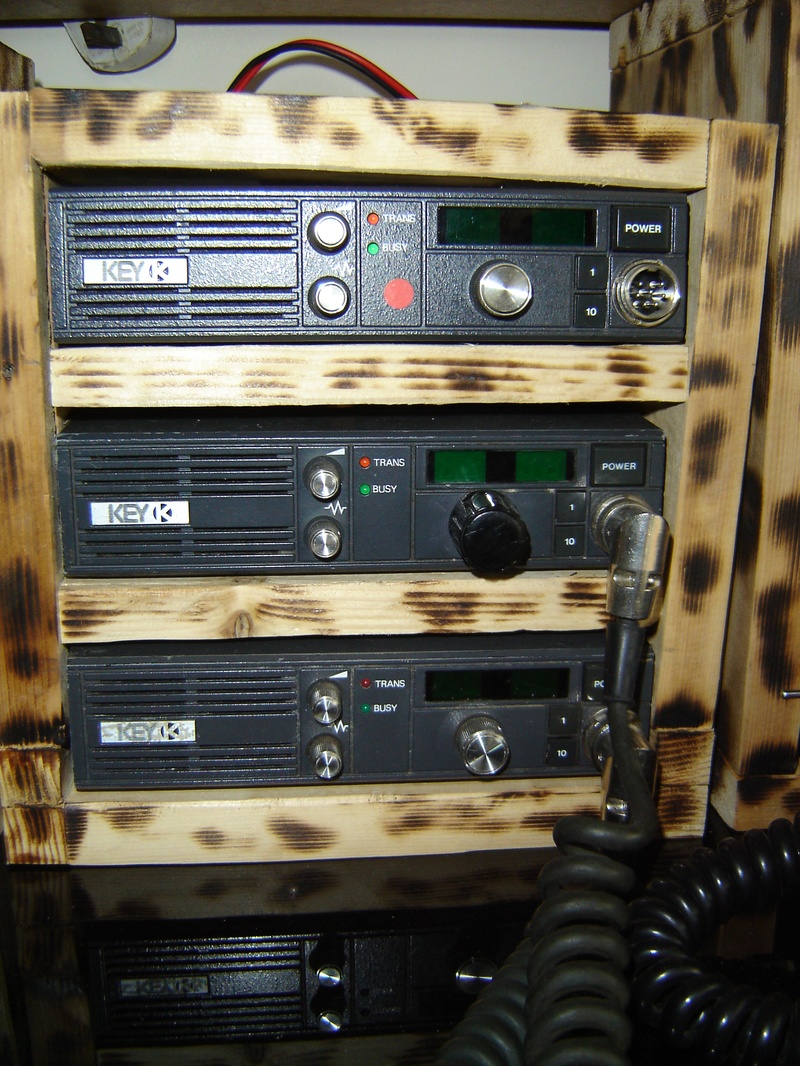 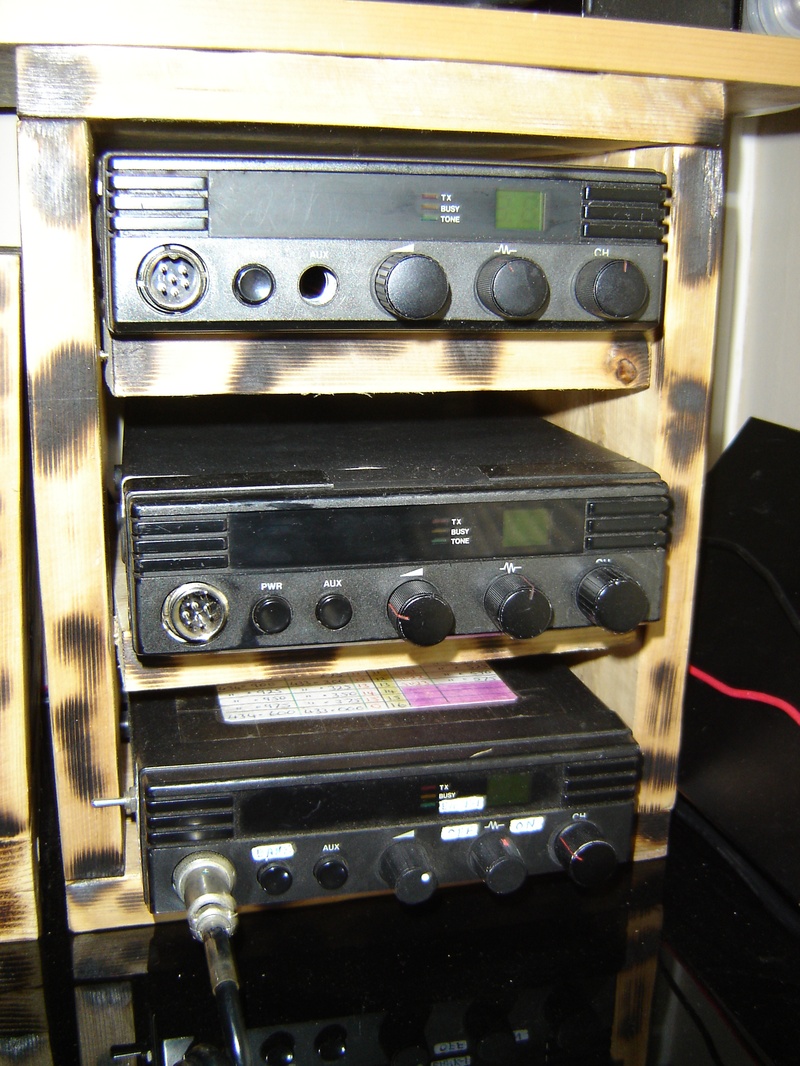 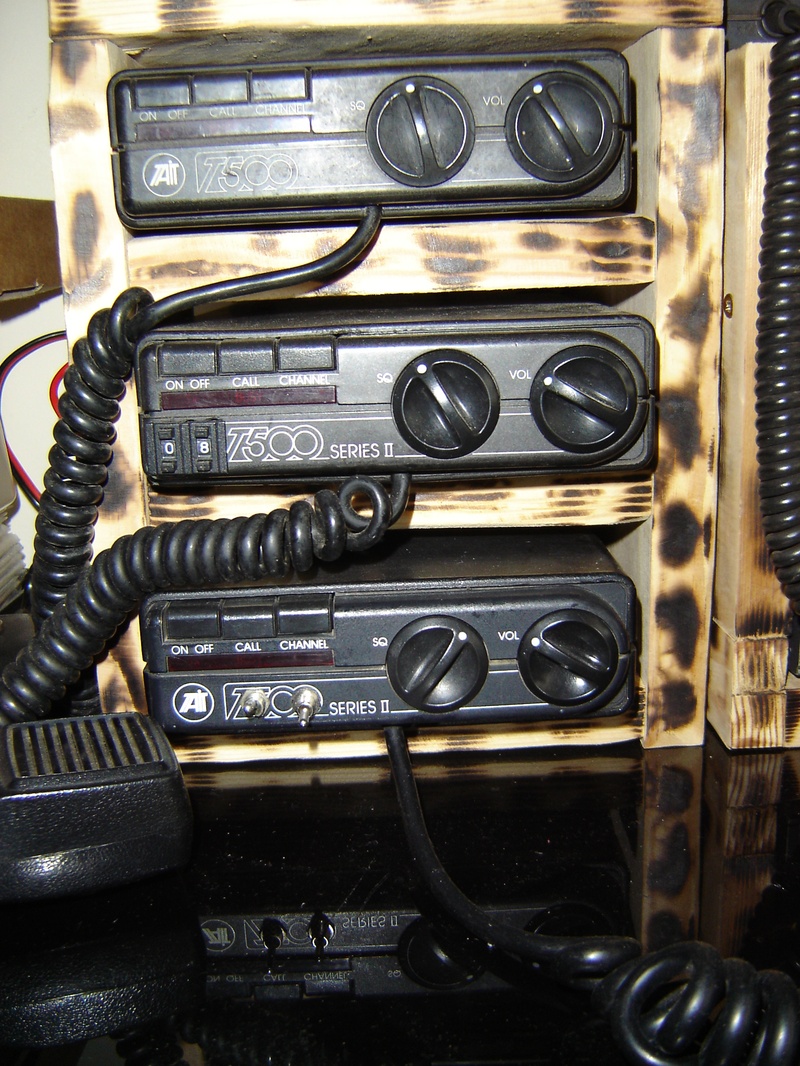 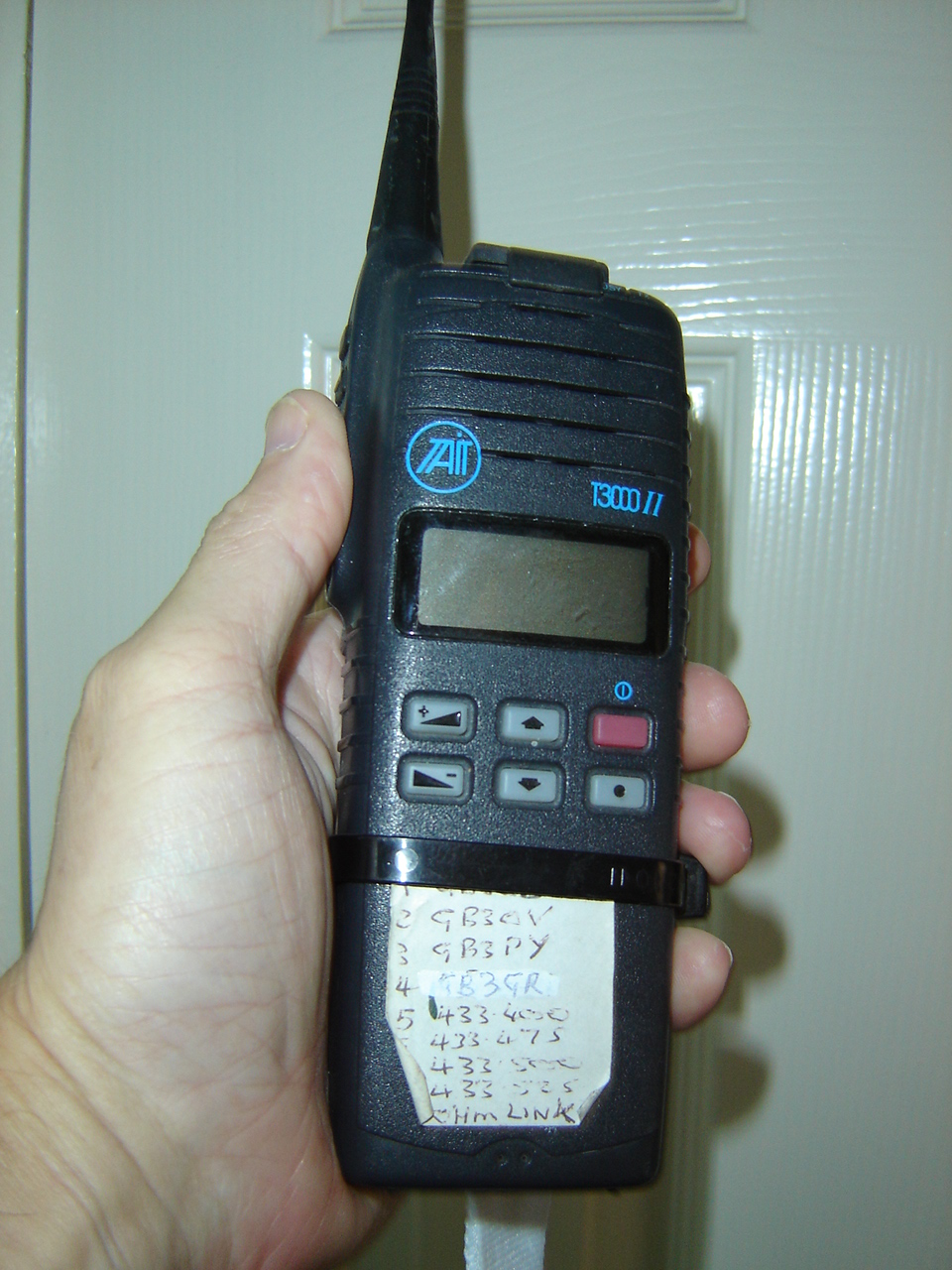 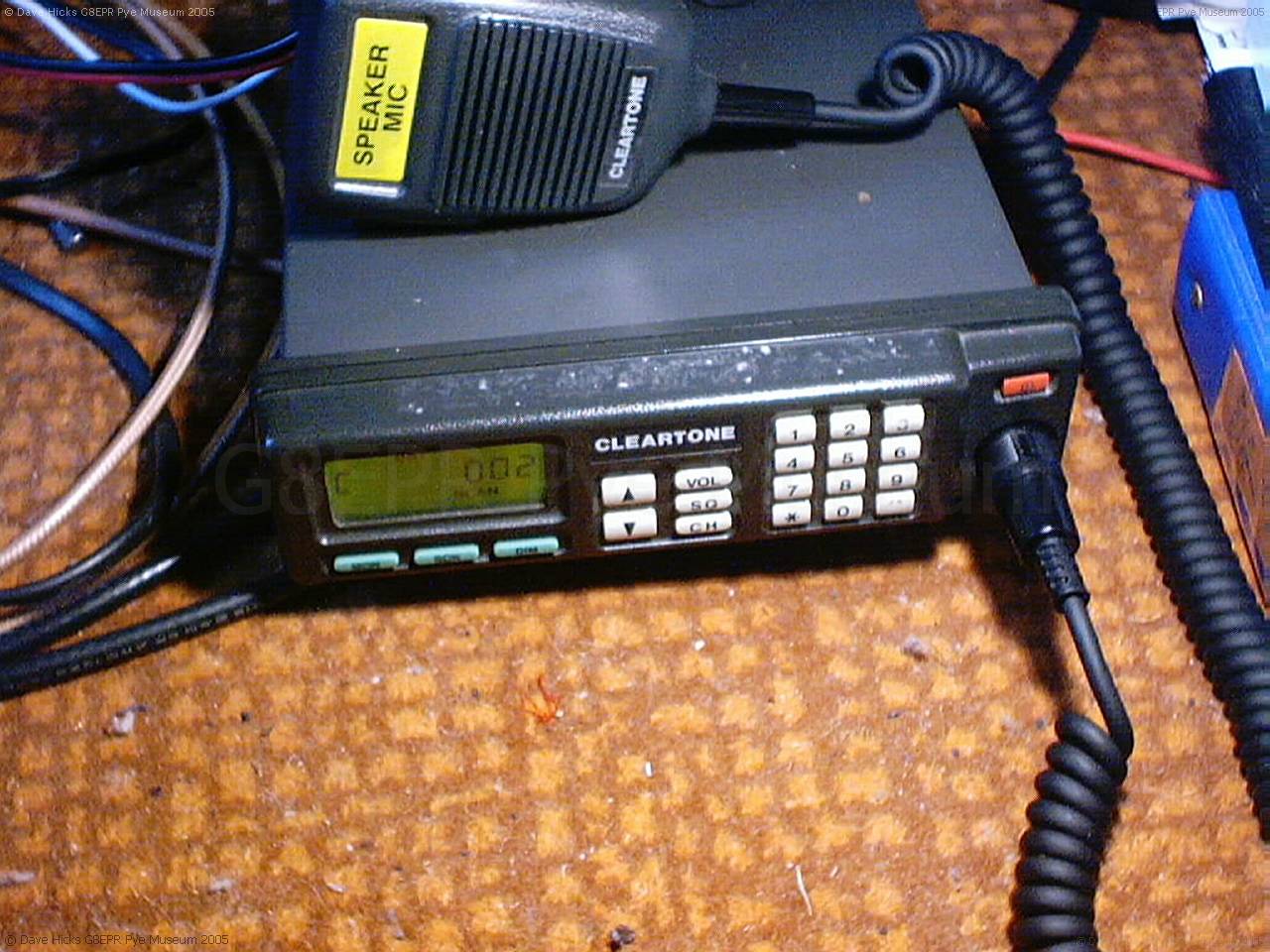 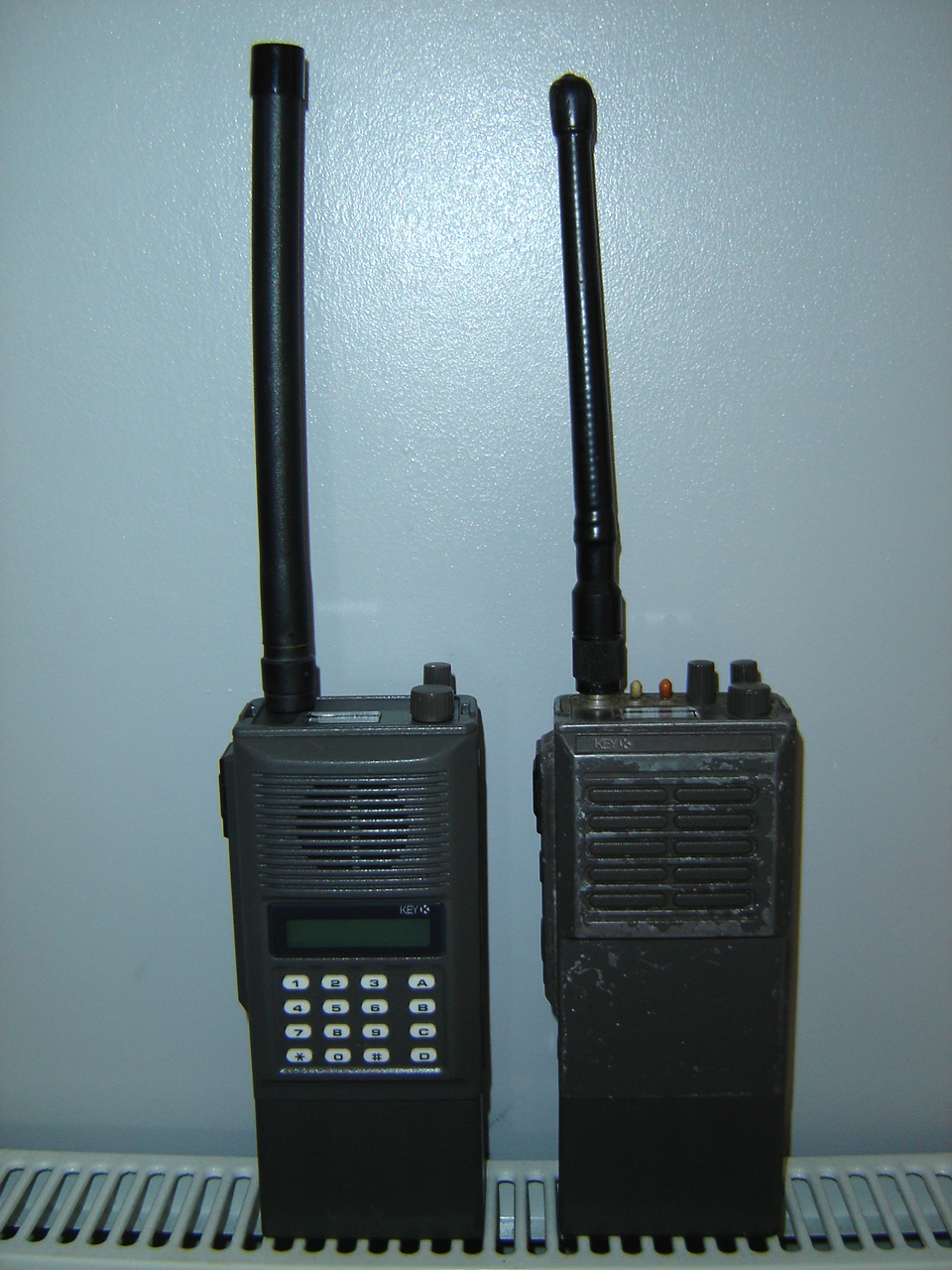 I have been playing with my Key series radio's.

In East Anglia i am lucky that i can access lots of repeaters .But they have different CTCSS tones.

On doing some reading i had a light bulb moment.

Take a look at the tone Chart.

You will see that all the tones mentioned all use switch 1.

So i linked  switch 1 on the tone board.

So by soldering leads to the back of the DIL switch on the CTCSS board and wiring to switches.

Multi CTCSS tones can be had.

Other combinations of CTCSS tones can be had . It's all down to linking and switches. 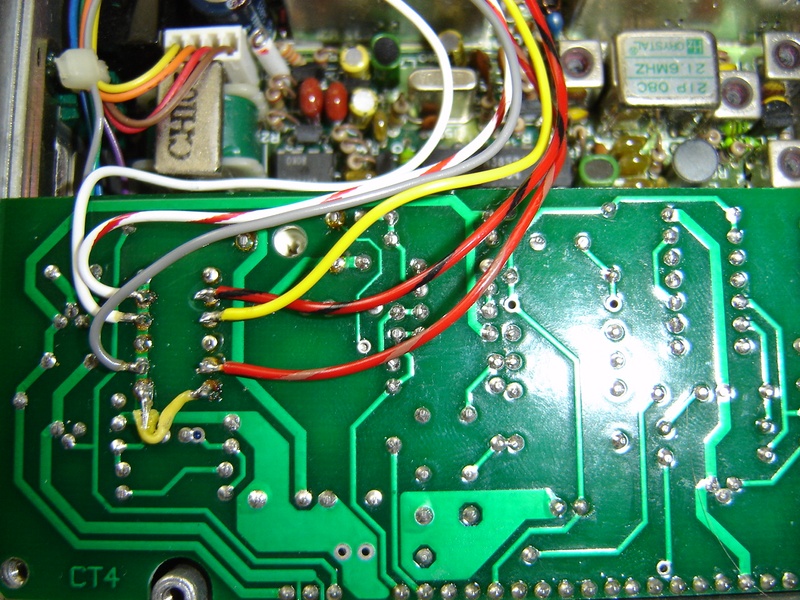 Note make sure all DIL switches are switched off.

This idea can be used on other CTCSS boards.I have done the same trick on a SIGTEC C1012 board.

I have had a Tait t525 4m transceiver some time now and wanted to add extra channels.

I came across M1DYP Website showing me how to modify the Tait. So all credit goes to him.

The mod requires adding 2 DPDT switches to the front of the transceiver.This mod can be carried out on 2m & 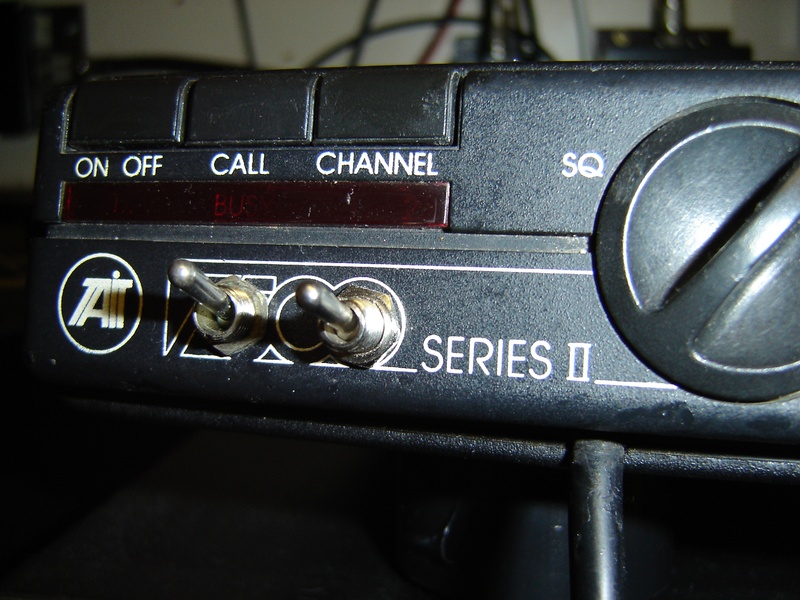 The picture below shows the back of the switches.These are wired to the diode matrix.

The diode matrix has diode links one for receive and one for transmit.

By choosing the correct diode links extra channels can be had . 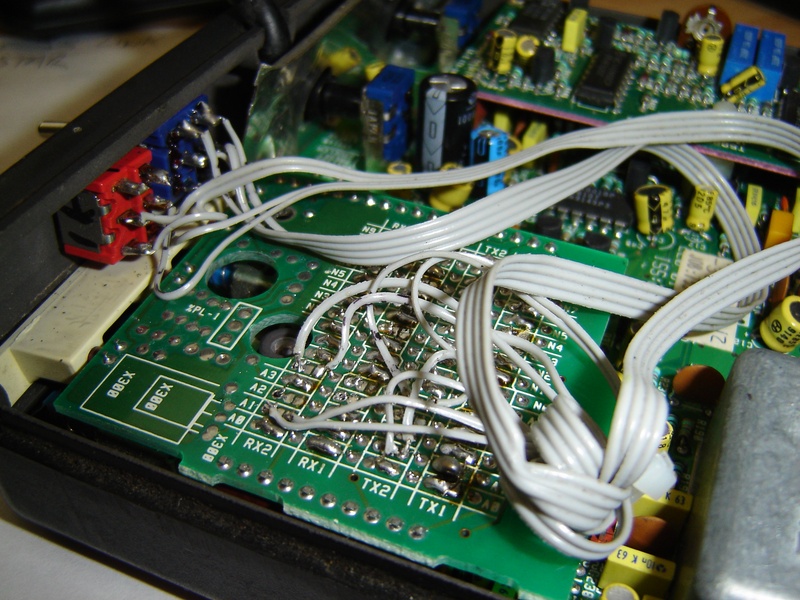 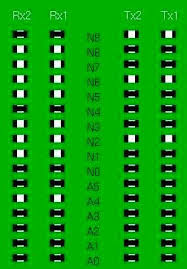 Values of the diode matrix:

So by adding 2 switches i have ended up with 5 channels.

By adding another switch would give me even more channels.

My thanks to Ken M1DYP for the idea.

Over the years i have gathered test gear so i can align my own equipment.

OK the gear is old but it works.

A Multimeter is useful, an analogue type is the best like an AVO.Digital types are no good as you need to see the swing on the meter while adjusting your radio.

Again i have an old bit of kit a AVO 8 and a PYE TM1 Meter ideal for the job. 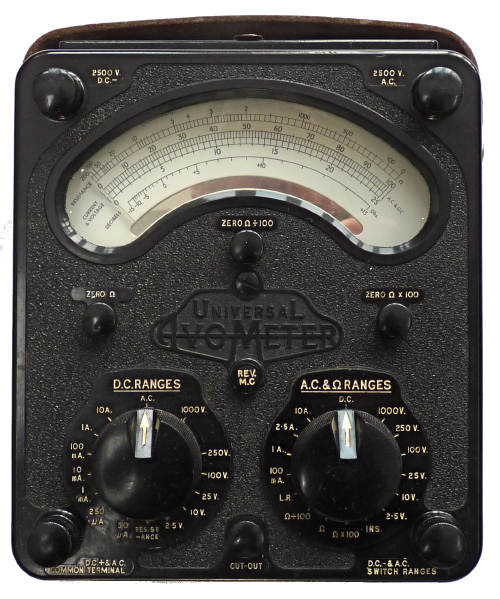 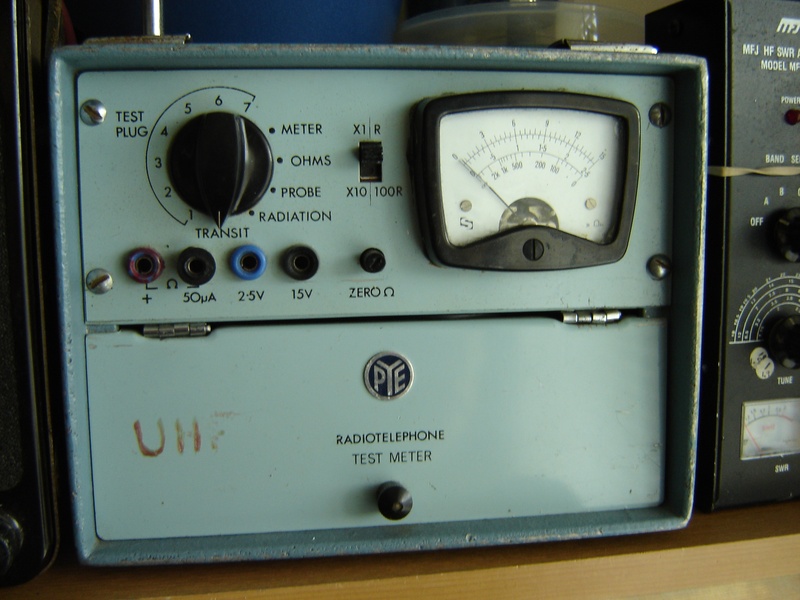 Next you need a way to align your receiver.A signal generator is useful. I have had 2 or 3 over the years.

The signal generator needs to have a variable signal attenuation. I.E strong to weak signal so you can weaken the signal as you progress through the alignment.

A couple of dummy loads are useful.Make sure they are ok for VHF,UHF work. 60w power level is good for short tests. 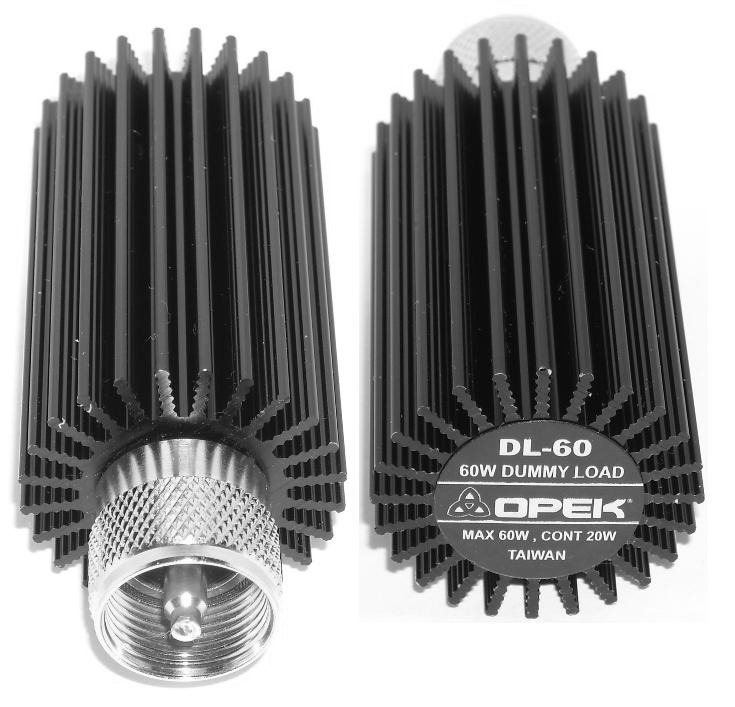 Next a way of checking the Deviation or the transmitted audio.A rough way is to get a fellow amateur to listen while transmitting.Over deviation on a signal is like the signal chopping off on your peaks.Try shouting  fours and six into your microphone as it will show up if you are overdeving .

A better way is to get a Deviation Modulation Meter. 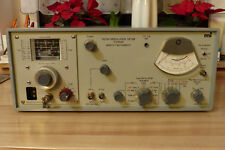 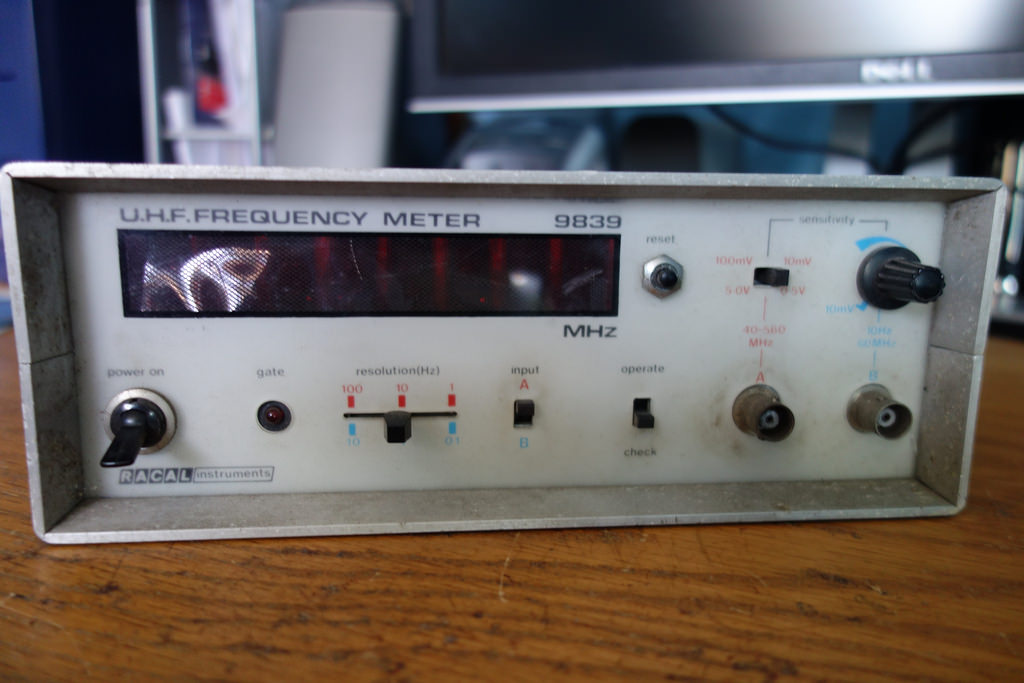 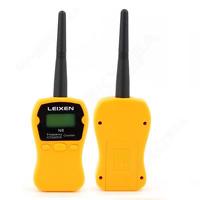 One thing i have learn't about test gear never transmit straight into them as it is instant death.

.Make sure it is flush to the nylon.I put a piece of insulating tape over the center pin .Next screw in an SO239 to S0239 joiner.I put a piece of red tape around the SO239 joiner to indicate the sniffer section.OK next screw in a dummy load on one side of the tee and a PL259 patch lead to the other.Next screw another Patch lead to the Siffer end if the tee.This goes to you test kit.There will be just enough RF sniffed to be able to align your radio.